*Abstract*****\--The power system will inevitably encounter interference from external factors during normal operation. After these external interferences are generated, no self-oscillation or monotonic out-of-step occurs, and the original operating state can be restored. This article describes the theory and simple application of the small interference analysis method for the static stability of the power system, and makes a detailed deduction and demonstration of the eigenvalue analysis method, and gives an example of the small interference method of the simple system. After the system is subject to small disturbances, it is still stable.\

A. Generation and causes of small interference

The study of the transient process and its stabilization process after the power system was affected by small disturbances was proposed by the famous 19th century Russian scholar Lyapunov. Lyapunov believes that any system in the dynamic range can be represented by a multivariate function, Here we make it denoted by

, When the system is affected by small disturbances and makes the parameter value different from the original function, we call it function

of all parameters approaches zero, namely

can be regarded as the system tending to be stable.

At present, there are three kinds of judgment methods applicable to the analysis of power system stability, which are frequency domain method, electrical torque method and eigenvalue analysis method. The theoretical basis of the frequency domain method is the transfer function and the multivariable Nyquist stability criterion. It is mainly used to design various controllers and select installation locations. The disadvantage is that the calculation amount is very large, which will greatly reduce the operation speed. , The key model information provided is also very limited. The physical meaning of the electromagnetic torque method is relatively clear, but the calculation is also relatively complicated. At present, the most commonly used effective method to judge the stability of the system is the eigenvalue analysis method, which not only absorbs the advantages of the frequency domain method, but also can reveal the essence of the stability problem of small interference and seek to solve his countermeasures. Make a comparative analysis table with time domain method and eigenvalue method:

III. Stability Analysis of Small Disturbance in Power System Based on Eigenvalue Analysis

The static stability analysis of small signals can be carried out using the characteristic root judgment method. The stability judgment method is generally completed by the following steps: ① The state equation after the power system is subjected to small interference is appropriately listed according to the situation; ② The listed non- The linear differential equation is transformed into a linearized equation; ③ Solve the root of the characteristic equation, and judge the stability quality of the system according to the change rule of the small increment of the parameter.

of the prime mover is a constant by default. When the generator is a hidden pole machine, the no-load electromotive force

of the generator is a fixed value, which is regarded as a constant, because the excitation adjustment system can adjust the electromotive force parameters. Let

be the power expression of the generator's electromotive force as equation (2).

Substitute the state variable formula (4) into the state equation (3) to get the formula (5):

Using the Taylor series to expand

in the vicinity of

, ignoring the term whose offset is higher than quadratic (including quadratic), the linear relationship between

can be obtained as:

Substituting equation (6) into equation (5), we can get the system state differential equations (7):

B. Linearize equation of state at equilibrium

Transform the state offset differential equations (7) into a matrix form to obtain the linearized system matrix (8):

And the general form of matrix (8) can be transformed into formula (10):

is a vector, which is composed of the derivative of the state offset.

is also a vector, consisting of the offset of the state variable. A is the coefficient matrix of the system equations of state. Then you can get a simple block diagram of the above system:

Fig. 1. Block diagram of generator operation in a simple system

Then the characteristic root can be obtained as (13):

It is easy to get through formula (13) that when

is less than zero,

produces two real roots with different signs. The monotonicity of

increases with the increase of t, so that for the generator, The aperiodic system of its infinite system loses its synchronization function, that is, the system is unstable. When

is greater than zero, a pair of imaginary roots are generated, and

will continue to oscillate with the same amplitude. The expression of the oscillation frequency is as shown in equation (14):

If there are no other special circumstances, the range of

D. The influence of damping link on stability determination

Add a damping link to the simple system of Fig. 1 to obtain the corresponding block diagram 2.

Similarly, the characteristic equation can be quickly derived from equation (12) as equation (15): 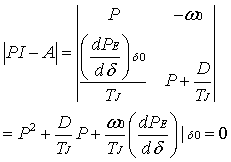 Find its characteristic root as:

Through the analysis of equation (16), when

is less than zero, no matter what the value of D is, there will always be a positive real number root, and the system will lose stability. When

will produce oscillations with increasing amplitude, and the system is unstable at this time.

. The initial state of system operation is

. The generator has no excitation regulator and the damping coefficient is

. A simple analysis of its stability is made.

A. Obtain the initial oscillation frequency without considering the damping coefficient of the system

Can be obtained from formula (9):

From equation (14), we can see that the initial oscillation frequency of this system is:

B. Judging the stability of the system when considering its damping coefficient

Judging the stability can be done by analyzing the root locus, which can be obtained from equation (16):

Use Matlab to run the following code to draw the root locus diagram:

The root locus diagram of the characteristic value changing with

According to the analysis in Figure 4, when

, the system no longer oscillates after small interference. When

, the characteristic value of the system is two real numbers with different signs, saddle junction bifurcation occurs, and the system will monotonously lose stability. Then its conclusion is consistent with the conclusion drawn by equation (16).

The various devices of the power system are multiple interconnected and superimposed. The power generation equipment, power consumption equipment and power supply equipment are all inseparable. The operation status of a single device will affect other devices, and even more. The normal operation of the power system. To this end, the system should have a self-adjusting function to enable it to run stably. This article briefly describes the basis for whether the power system can continue to maintain stability after receiving small interference signals during normal operation, that is, whether it will produce out-of-step phenomenon, and gives the conditions for judging the stability of the system, that is, without considering the impact of the damping factor D At this time, the condition for stable operation of the system is

; the condition for stable operation of the system is

when considering the influence of the damping factor D.